ECT (electroconvulsive therapy, it used to be called “shock therapy”) has been around for a long time. For unknown reasons, it helps with depression and bipolar disorder. I wrote an article about my personal experience with ECT earlier in the month. Some people still think it’s a brutal, gruesome treatment but it really isn’t. My ECT doctor said it was 75-85% effective, and it helped me tremendously.

“During electroconvulsive therapy, a patient is anesthetized and a small amount of electrical current is used to stimulate the brain. This produces a modified seizure, which, in turn, changes the activity of the brain. Some of these changes are similar to those seen with certain antidepressant medications in the way they relieve symptoms. The medications used for anesthesia prevent injury and patients feel no discomfort during the procedure.”(4)

TMS stands for “transcranial magnetic stimulation”(2) and works under the impression that the brain can be stimulated by magnets, something becoming more common. Magnetic fields easily pass through the skull and into the brain, but to effect the neurons inside the head, there must be a lot of magnetic energy flowing. TMS machines send a pulse through every three seconds and were made for diagnostic testing. It is non-invasive with very few side effects and capable of modifying the brain.

The magnetic field in TMS works by magnetic fields being produced by a passing current in a hand held coil(2). The shape determines properties and size of the field. The coil is held at the scalp, and no contact is necessary, unlike ECT, when the electrodes touch your scalp.

TMS has less side effects. There has been reported that there is no memory loss and no seizure. It was invented in the late 1980’s, while ECT has been used since the 1930’s(3). ECT is 70% effective.(5) Both procedures cause headaches. TMS takes more time, up to 5 times a week for an hour. A doctor, a nurse and an anesthesiologist are required for ECT and the patient wakes up confused and often disoriented. TMS doesn’t have these side effects, you get up and walk out. 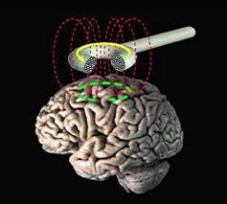 What exactly is TMS?

“Transcranial magnetic stimulation (TMS) is a non-invasive treatment for adults with major depression that uses magnetic stimulation of the brain to help modulate mood. The procedure was approved by the Food and Drug Administration in October 2008 after more than ten years of clinical investigation in patients who failed to achieve satisfactory improvement from depression from one course of pharmacotherapy (medication). For this reason, transcranial magnetic stimulation (TMS) is particularly helpful for people with depression who have not experienced significant relief from antidepressant medications or have difficulty with side effects.”(4)

ECT is a quicker fix than TMS. It takes 7-10 sessions, on average, for ECT which is only a couple of weeks. TMS is 5 days a week, for several weeks. It is not known exactly how ECT works. ECT has a durability of six months, on average. Generally, a patient is taken off of meds before ECT, while during TMS they can stay on the medications and get a “boost” from them. In many cases, the patient still has to take medication after, but not as much, and it’s more effective.

“One of many theories of ECT efficacy is that the electric field releases a torrent of neurotransmitters.”

As for price, TMS runs at about $10,000, while ECT is about $24,000 because of the team needed to administer the treatment. ECT is still considered the best and quickest acting therapy for treatment resistant depression.

A blog with a bit of everything

The Progress Series by Amy Queau
Impossible Things Before Breakfast!

What's Inside the Art Box?

Love Lives Inside You

Knowledge and Happiness(K&H) multiples by dividing it. More you share, higher and bigger they grow.